Yildirim International Entrepreneurship Award has been established in honor of the distinguished work and lifetime achievements of business tycoon Robert Yuksel Yildirim, an engineer with BSc (Turkey) and MSc (USA) degrees. Despite holding no business degrees, a lifetime of hard and smart work enabled him to turn his father's business from a small Samsun (Turkey)-based one when he took charge of it in 1993 as its President & CEO, to a multinational group of companies present on 4 continents and in 49 countries as can be seen here. 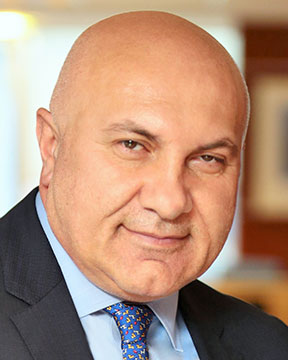 Robert Yuksel Yildirim, born in Sivas, Turkey in 1960, received his bachelor's degree in mechanical engineering from Istanbul Technical University, Istanbul, Turkey in 1983 and his master’s degree in mechanical engineering from Oregon State University in Corvallis, Oregon, USA in 1989. He began his career as a design and project engineer at Paceco Corporation in San Mateo, California, USA, working for five years designing container cranes before he joined the management board of the family-owned company in 1993. Under his leadership as President & CEO, Yildirim Group is today a global player in metals and mining, port management, coal and coke, fertilizers and chemicals, energy, and maritime industry. Lloyd's List ranks Robert Yuksel Yildirim among the top 100 most influential people in the shipping industry (#46), and among top 10 most powerful people in container terminals industry (#8). Consulting company Drewry lists him as one of the top 20 global leaders in port operations. Robert Yuksel Yildirim is also among the top 3 leaders of the global chromium industry. In addition to his responsibilities at Yildirim Group, he is a Board Member of CMA CGM Group, and Yildirim Group owns 24% of its shares. He is also a Member of the Board of Trustees at Garip & Zeycan Yildirim Foundation, and the Chairman of Foreign Economic Relations Board (DEIK) Turkey-Colombia Business Council. Robert Yuksel Yildirim is married and has two children.

The purpose of this Award is to acknowledge the work of various personalities for great entrepreneurial successes in diverse fields of life, especially directly or indirectly related, but not limited to, science and new technologies for sustainable development.

The Award Citation reads:
"For innovative leadership in establishing, developing and/or growing, against all challenges, odds and risks, a sustainable business in environment, economy and social point of view"

Proposals of worthy candidates are solicited for Yildirim International Entrepreneurship Award.
They have to be submitted at secretary@flogen.org

Deadline for proposals and expression of interest: 31 August